Full-Scale Sales Expansion of ASKA3D in Europe:
Establishing a Sales Office on June 1 in Alsace, France

We are pleased to announce that Asukanet Co., Ltd. (hereinafter referred to as Asukanet; head office: Hiroshima-shi, Hiroshima, President and CEO: Yukio Fukuda) is going to open a sales office in Alsace, France, on June 1 in order expand the sales of ASKA3D in Europe as part of its aerial imaging business division.

Ever since we started presenting our products at various major exhibitions abroad in March 2017, the brand recognition of ASKA3D in Europe has increased, which resulted in a strong response from the market. In order to further expand and develop our business operations in Europe, we are going to utilize the “business incubation system” for Japanese companies provided by the Centre Européen d'Études Japonaises d'Alsace (CEEJA)* and establish a sales office on the premises of that center.

Alsace is a region located in the heart of Europe. Approximately 75% of the entire European purchasing power is concentrated within a 800-km area here. Bordering Germany and Switzerland, this French region is highly advanced in fields such as medicine, aviation, car industry, and science. We believe that this aggregation of cutting-edge technology makes Alsace an ideal place to expand our business.

*This is a center for Japanese studies established by the Haut-Rhin department and Alsace government in 2001 with the goal of promoting economic and cultural cooperation between Japan and Europe, in particular the Alsace region.

The President of CEEJA, Olivier Becht (Member of French Parliament/Member of the Parliamentary Assembly of the Council of Europe), came to Japan on May 15, 2018, and visited the showroom at Asukanet Tokyo branch (Minato-ku, Tokyo) to sign the foundation contract for the new sales office. We are planning to cooperate with the regional governments in France, Chamber of Commerce and Industry of Alsace, and national research institutes in order to get the support we need to expand the business operations of Asukanet in Europe. 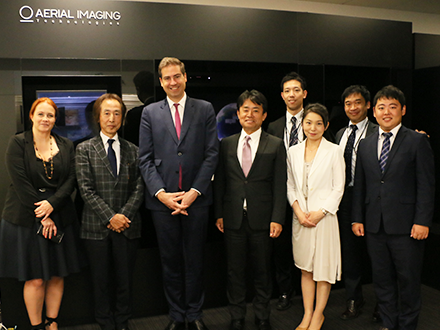 Handling our European operations in real time used to be an impossible task due to a seven-hour time difference with Japan (with daylight saving time). Since we are now planning to establish a sales office there, we are going to hire a company called Europe Access (based in Colmar, France) and entrust them with running our sales and market research activities in order to make sure our business is managed smoothly. However, we are only going to hire the company to manage a part of our sales efforts rather than the entire operation.